If there’s a mid-am tournament in the Houston area, chances are the names of John Hunter and David Ortego will be near the top of the leaderboard.

Playing what amounts to a home game this week, both players enjoy first-round leads at the Carlton Woods Invitational being held in The Woodlands, Texas.

Hunter, who makes his home in nearby Spring, shot a 4-under 68 to open a three-shot lead on the field. His near-flawless round began with a pair of birdies out of the gates. He then moved to 3-under with another birdie on the par-3 seventh hole and got it to 4-under with his fourth birdie on the day on the par-5 13th hole.

He quickly erased his lone bogey of the day on the 15th with a birdie on the very next hole and finished with a pair of pars for a round of 68.

Hunter, a former college baseball player at Purdue, has had his fair share of success in the Houston area, most recently winning the Champions Cup Invitational at Champions Golf Club in northwest Houston with partner Brad Segreto. He is also a past winner of the Greater Houston Amateur and the John R. Williams Four-Ball Invitational (with Kyle Nathan) at Oak Hill Country Club in Rochester, NY.

Nelson opened his first round with 11 straight pars before dropping a shot on the 12th. However, he picked up birdies on holes 15 and 16 to finish his day in the red.

Lindstrom’s 71 consisted of two birdies and a bogey while Niezing had the most interesting round of the day.

The former Missouri Amateur champion bogeyed the first three holes and after settling down with a par on the fourth hole, birdied four of his next eight holes to move to 1-under on the day. He dropped a shot on 16 but bounced right back with his fifth birdie of the day on 17 before eventually signing for a hard-fought 71.

Former U.S. Mid-Amateur runner-up Joe Deraney, who won this event in 2018, is part of a large group at 1-over par.

Scott Maurer was 5-under on his round through 14 holes but finished bogey-bogey-bogey-triple to fall to 1 over.

In the senior division, defending champion David Ortego carded a 2-under round of 70 to take a one-stroke lead over four-time champion and Texas Golf Hall-of-Famer Mike Booker, Kip Estep and William Shock. 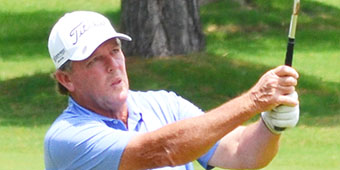 After making an early double bogey on the par-4 second hole, Ortego, 63, went 4-under the rest of the day for a round of 70. Booker was the only player in either division to put together a bogey-free round on Tuesday, finishing with 17 pars and a birdie on the par-5 fourth to sit one back of Ortego.

Gary Durbin was 4-under par through 12 holes and held a three-shot lead but made two sixes in three holes, on the par-5 13th and the par-4 15th, arguably the hardest hole on the course. Another bogey on 17 led to a even-par round of 72, but the two-time Texas Senior Amateur champion and Houston native is just two strokes off the pace.

Defending champion Jeronimo Esteve struggled to an 80 with his lone birdie coming on the final hole.

Notebook: Jack Nicklaus was at Carlton Woods over the weekend and commented on how much he loved the setup of the course, particularly the “native area” high grass cut, but he warned against getting the green speeds too high…the greens were stimping 12.3 on Tuesday morning…Annika Sorenstam was seen practicing at Carlton Woods over the weekend in preparation for her first U.S. Women’s Open appearance since 2008, which is just one month away…both Nicklaus and Sorenstam were in The Woodlands for the 3M Greats of Golf exhibition in conjunction with the PGA Tour Champions Insperity Invitational.