With most of the fields going in the opposite direction, Chris Wheeler and Robert Funk turned in the lowest rounds of the day to surge to the top of the mid-and senior amateur leaderboards on Wednesday at the Carlton Woods Invitational being held in The Woodlands, Texas.

Wheeler’s second round 69 moved the Addison, Texas resident into a tie with John Hunter, who followed an opening-round 69 with a 3-over 75 on Wednesday. At 1-under 143, Wheeler and Hunter will take a one-shot lead over Joe Deraney, Toby Zeringue and Padden Nelson going into Wednesday’s final round.

Funk carded a brilliant round of 68 (-4) to open a six-shot lead in the senior division over defending champion David Ortego, Scott Smith and Gordy McKeown.

Wheeler used a red-hot inward nine en route to carding a 3-under 69 in the swirling winds that plagued the players all day at Carlton Woods.

The two-time Texas Player of the Year birdied holes 7 and 8 to make the turn at 1-under for the day and then dropped back to even after a bogey to start his second nine. After pars on 11 and 12, Wheeler then caught fire, reeling off four straight birdies on holes 13-16 to move to 4-under on the day. A dropped shot on 18 left him with a 69.

Hunter, playing close to home in nearby Spring, enjoyed a three-shot lead at the start of the day but a double bogey on the par-4 14th led to a 3-over round of 75.

In hot pursuit of Wheeler and Hunter are Deraney, Zeringue and Nelson, who are just one off the pace at even-par 144. Jon Lindstrom is just two back at 1-over 143. Zeringue was 1-over on his round after making a bogey on the 13th, but birdied three of his last five holes to card a 2-under round of 70.

Deraney, the 2018 champion, bogeyed 14 and 16 and three-putted from the back fringe for par on the par-5 18th to finish with a 1-under 71 while Nelson overcame a double/bogey start to get his round back to even before a bogey on 18 led to a round of 73. 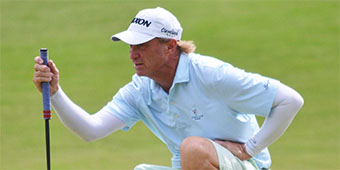 Funk racked up some serious miles in making the journey to The Woodlands from his home in Canyon Lakes, Calif. and it looks like the long trip is going to be well worth the effort for the Californian.

A second-round 68 left Funk at 4-under 140 at the 36-hole mark of the tournament, which is good for a six-stroke lead over Ortego, Smith and McKeown heading into Thursday’s final round.

With five birdies against a lone bogey, Funk turned in the lowest round of the day in either field.

Mike Booker, a four-time Carlton Woods Invitational senior champion and Texas Golf Hall of Famer, was keeping pace with Funk before dropping four shots over the last four holes to fall to 3-over 76 to finish with a 76 (+3) and finds himself seven off the pace heading into Thursday’s final round.